THIS PAGE IS UNDER CONSTRUCTION – Update Coming Soon! Hospital Director
Dr. Chad Lewis graduated from OSU in 2004 with a Doctorate in Veterinary Medicine. Since his graduation, he has been working in the Tulsa area with the VCA Animal Hospitals. 2013 brought a new opportunity as the Hosptial Director at Chimney Hills Animal Hospital.  At the beginning of 2019, Dr. Lewis purchased the clinic and is now the sole owner. His special interests include; internal medicine, preventative/wellness medicine, PennHip testing. When not at work he loves to spend time with his wife Sarah and twin boys Parker and Porter. He also enjoys golfing, cooking, reading and hanging out with his 2 boxers, Finnegan and Fiona. 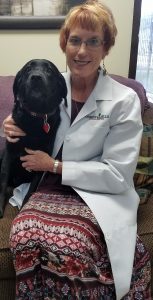 Associate Veterinarian
Dr. Barbara Miller completed her undergraduate degree in Biomedical Science from Texas A & M and then completed her Doctorate of Veterinary Medicine from Texas A & M University in 1979. She is married to another Aggie, Bill, and they have been married for 34 years. They have a son, Justin, who is an Outreach Minister in Joplin and a daughter, Jordan, who works in Texas as a missionary. Dr. Miller also enjoys missions work with several churches, showing Palomino horses, and working in the community to give back. The Millers have 4 horses, 1 Lab and 2 cats.

Practice Manager and Registered Veterinary Technician
Jennifer Potts was born and raised in Fort Smith, AR. She has received her Bachelor’s degree in Zoology from Oklahoma State University at Stillwater, OK and her Associate’s in Veterinary Technology at Crowder College in Neosho, MO. She has been a Registered Veterinary Technician since 2010. Prior to joining the Chimney Hills team, Jennifer worked in Emergency medicine for 4 years. Jennifer has a Maltese named Meeko, a Yorkie named Toki, and a Yorkie mix named Itzy. She also has a cat named Alby. She spends her free time with her husband John, watching movies, or listening to music, watching baseball, and cheering on the OSU Cowboys.

Registered Veterinary Technician
Amanda joined the Chimney Hills Team in August of 2018.  She graduated in May 2019 from TCC with her degree in Veterinary Technology.  More info to come soon 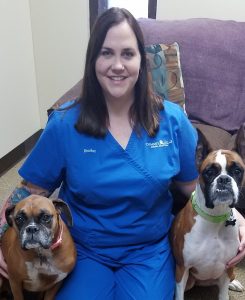 Receptionist
Heather joined the Chimney Hills Team in May of 2015. Heather has worked as a veterinary assistant for 12 years prior to joining Chimney Hills as a receptionist. Heather has 2 boxers, Laila and Nola. Heather has been taking classes at OSU in order to obtain her Bachelor’s degree in English Literature. She also attended classes to become an EMT. In her time away from the clinic, Heather enjoys watching movies, reading, writing, and anything else creative. She also loves to spend time with her dogs, as well as her friends and family.

Receptionist
Megan joined the Chimney Hills Team in October of 2017.  On her off time, Megan has her own cookie business where she bakes decorative sugar cookies.  She also enjoys listening to music, the arts, and baking.  Megan obtained her degree in the culinary arts from OSU-IT.  Megan also loves to spend time with her family and her dog Brulee.

Animal Care Attendant
Gabbie started job shadowing here at Chimney Hills during the Spring of 2017.  She was hired on in November of 2017 as an animal care attendant.  At this time Gabbie is enrolled in classes at Tulsa Community College with an interest to become a veterinarian.  Gabbie has a dog named Bentley.  In her spare time, Gabbie likes to play soccer, spend time with her friends and family and play with her dog.

Groomer
Cathy started grooming at Chimney Hills Animal Hospital in January of 2018.  Cathy has over 20 years of experience as a groomer.  She has worked in several different grooming shops throughout Tulsa and has even helped to open grooming shops as well.  More info to come soon Coco came to Chimney Hills in July of 2006.  She had been in an accident and lost her eye.  We took her in and fixed her, and now she pays us by being the best mascot in the world.  You may see her in the lobby, or in her condo soaking up the sun.  Coco loves to be loved on and likes to cuddle with everyone.  Some of her favorite things are eating, snuggling, and finding all the random places to take a nap on.